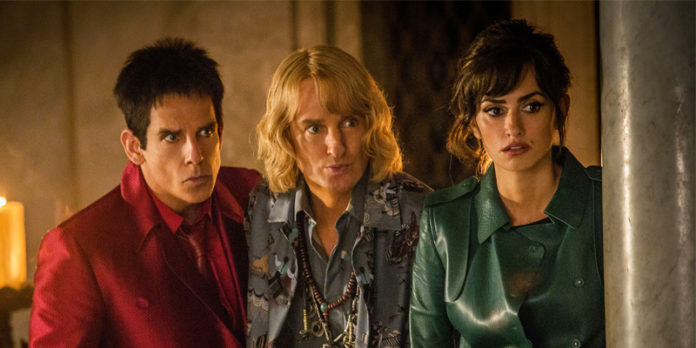 A sequel to any great comedy will always have a number of handicaps. Everyone already knows the characters; they know the world. The audience wants more of the same magic, yet they still want to be surprised by what the film has to offer. Additionally, they expect the same high level of comedy with a story just as engaging, even if the original had a neat, solid ending. Zoolander is a great comedy. Having been released over 14 years ago, there was no way its sequel wasn’t going to disappoint at least a little. What I didn’t know what just how disappointing it would truly be. Was it a bad film? Maybe, but I laughed a lot, and those laughs have to count for something, right? RIGHT?

Released a mere two-and-a-half weeks after the September 11 attacks, Zoolander was an unfortunate victim of circumstance. While it got mixed reviews and made over $60 million during its theatrical run, it was discovered by many and became a cult favorite after its home release. From getting the black lung to Hansel being so hot right now to the question “but why male models?”, Zoolander is frame-to-frame laughs. Not only was it Ben Stiller’s best role, but the same could be said about Owen Wilson and Will Ferrell. It is, arguably, one of the funniest comedies of all time.

Zoolander 2, story-wise, is a complete and utter mess. With his wife (Christine Taylor) killed and his friend Hansel’s (Wilson) face ruined by the collapse of “The Derek Zoolander Center for Kids Who Can’t Read Good and Who Wanna Learn to Do Other Stuff Good Too”, and his son taken by child services, Zoolander (Stiller) lives alone and secluded in a snowy mountain cabin in Northern New Jersey (It’s funnier in context… sort-of). When fashion designer Alexanya Atoz (Kristen Wiig) calls on him to walk in her new fashion show in Rome, he believes this is the perfect way to prove that he’s fit to be a father. Meanwhile, pop stars are being murdered around the world and the only one who holds the key is Zoolander. With the help of Hansel and Interpol agent Melanie Valentina (Penelope Cruz), he must help solve the mystery while trying to put his life back to the way it once was.

If that felt like too much plot, that’s because it is. Even worse, the second act brings a mystical backstory into play, one which seemingly gives a lot of context to the events of the first act, while the third act takes everything that happened prior and… well… negates it in the hokiest way. The whole film is just a long con by Mugatu (Ferrell) to kill Zoolander. But it gets worse: Hansel’s subplot. He’s going to be a father to 12 children, all of which were conceived during an orgy of 13 involving both men and women (do the math… or don’t). Because he doesn’t know his father, he doesn’t believe he can be a good one himself, so he must discover who he really is. I’m serious. That’s his “hero’s journey”. It was awful. Dreadfully awful.

Laugh-wise, Zoolander 2 delivers just enough to give the film some positive qualities.  Fred Armisen’s head on a child’s body? Hilarious. Zoolander pondering the morality of fat people? I laughed more than I’m proud to admit. Kristen Wiig pronouncing every word in a strange, unique way? Stole every scene she was in. The only time there weren’t laughs was when the film needed to dump exposition or shoehorn in another cameo. Yes, some were funny – I can’t even mention the best ones –  but others, like Katy Perry, felt shoehorned in.

I have to give a shout out to two performances in this film: Kyle Mooney and Will Ferrell. I love Mooney on Saturday Night Live. All his characters are brilliant, and that’s due in large part to his performances. While Don Atari wasn’t comically well written, Mooney sold every line. I hope this is just the first of many film opportunities for the guy. As for Ferrell, I thought Mugatu was a great return to form. I wish he would go back to actually playing characters rather than fall back on being loud. Too bad enough people saw Daddy’s Home that it probably won’t happen.

The more I think about this Zoolander 2, the more I dislike it. The original is just so good. That said, this is worth a rental. There are enough good moments to keep you entertained, but enough bad ones to make you glad you only spent $5, at most, on the film. If Stiller wants to make a Zoolander 3, I’d be open to another adventure, but it’ll have to be at least 10 times better than this to get in into the theater.

My Review: Guardians of the Galaxy