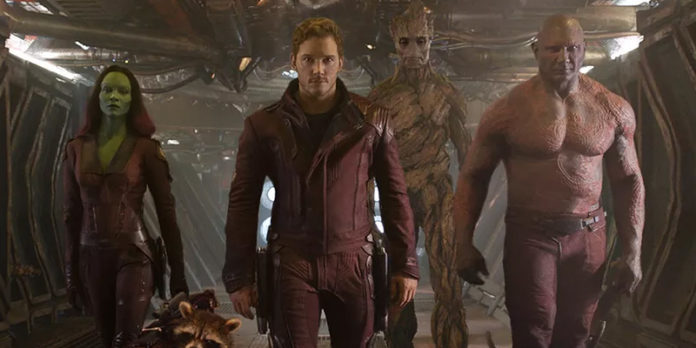 The only Marvel film to elicit my tears has been Captain America: The First Avenger. It was impossible to stay dry eyed during Steve Rodgers’ and Peggy Carter’s final* conversation. And to be completely honest, that was the last time I believed Marvel would make my eyes water. Especially as each movie got more and more action heavy. For this reason alone, I didn’t expect to get emotional during Guardians of the Galaxy. I was not ready to feel feelings. But I did. Mostly over a CGI raccoon and tree… creature… thing. I came out of the theater with a huge smile on my face. While Guardians of the Galaxy is nowhere near perfect, this is exactly the kind of film Marvel needs to continue making.

Marvel films have gotten very predictable, and by no means was Guardians of the Galaxy full of surprises. If this was a sequel, there would have needed to be more twists and turns, but it wasn’t. This was another chance for Marvel to make an origin story; to put new characters with new personalities on the big screen. These characters were funnier than those we’ve seen thus far. Two of them were also 100% more computer generated than prior heroes. But, most of all, they felt three-dimensional. I could relate to them. More so than I could relate to heroes such as Thor or Hawkeye.

Chris Pratt is amazing as Peter Quill aka Star-Lord. Okay, maybe amazing is too strong a word, but seeing as I still know him as Parks & Recreation’s Andy Dwyer, he has really come a long way. Ironically enough, he plays the straight man for the most part. The real comedy is left to Groot (Vin Diesel), Rocket Raccoon (Bradley Cooper) and Drax (Dave Bautista). All three have their major quirks and acting styles, which when mixed together come with some tasty results. The only guardian with little personality is Gamora (Zoe Saldana). Perhaps it’s because they never hint at her past beyond her parents being killed by Ronan (Lee Pace), a character with some major blandness issues. Or maybe it’s because she only gets one or two humorous moments. It could even be that Saldana plays her in such a mono-toned way.Regardless of the reason, she was weaker than the rest.

Another issue Marvel has is with their villains. Besides Loki, they are all so bland. Ronan was just a vessel for a power stronger than himself. Nebula (Karen Gillan) was barely there, as if she was quite obviously being set up for the film’s sequel. Marvel loves to put focus on items, such as the orb in this film, and because of this, they see villains as simply “protectors” of said items in order to feel like something is accomplished by the time credits role. They have no personality beyond evil. The latest Thor film has this same exact issue.

Of course, when you have such an interesting script with great characters you don’t necessarily need an amazing villain. One minute you have action, followed by sentiment, followed by humor. The tonal shifts this film had were major at times, but at no point did they feel out of place. And not since Star Wars have I seen space travel as interestingly done. This film went to several planets, all of which were vastly different in design. At no point did it feel like too much. In fact, I never thought there were too many visual effects. There were just enough.

Did I mention the humor? I’m sure I did, but it’s never a problem to mention it again. This is easily the funniest film Marvel has released. It’s also the most inappropriate, though no F-bombs. Mostly it was all innuendo. I love innuendo, especially when done correctly. Funniest character? Rocket, though Drax gets a lot of funny moments himself, as does Quill. There were no flaws in this film pertaining to humor. It was all strong. All of it.

I will admit, the film’s opening scene, while tragic, had me very worried. In it, Peter Quill’s mother dies just before he gets kidnapped by aliens. It’s meant to be emotional, but the poor acting by just about everyone in this scene (a younger actor plays Quill as a child) kept me from really being able to engage. I thought perhaps this film would ruin every emotional moment, but I found this was the only one that didn’t work. Even later scenes which were call-backs to this one worked. It just goes to show: A bad child actor can ruin a perfectly well written scene. Such a shame.

Of course, this whole review is approaching this film as what it is: A summer superhero film. Are the performances award worthy? No, probably not. Was the story amazing? No, it wasn’t. Is this even the best film of the summer? No, both Chef and Dawn of the Planet of the Apes were better. But is this the best Marvel film so far? Yes, yes it is. It has heart, humor, action, a great soundtrack, and, best of all, it’s a whole lot of fun. Fun I would gladly have again, next time in 3D. I really need to see this film in 3D.

*At the time, it was final. I consider this one of Captain America: The Winter Soldier’s flaws.